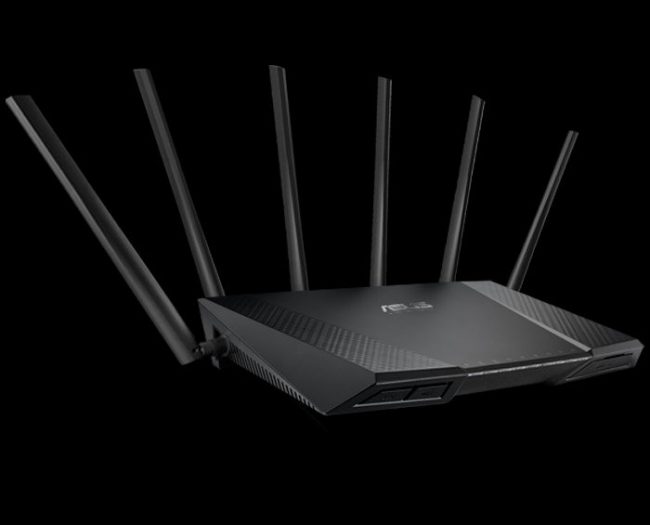 The RT-AC3200 is Asus second-tier router, sitting behind only the monstrous RT-AC5300. With three Wi-Fi bands (2 x 5GHz and 1 x 2.4GHz), USB storage, printer sharing and more aerials than you can shake a stick at, it certainly packs in the features.

However, with a price of £200, and its lack of the latest MUMO feature, does it do enough to justify a place in our best routers roundup?

While the RT-AC3200 isn’t quite as monstrous in its looks as the colossal RT-AC5300, this is still an imposing unit. Measuring 290 x 188 x 58mm and weighing nearly 1kg, there’s little chance of it being dragged around and pushed over by unwieldy network cables, as can happen with the puny routers provided by your ISP. 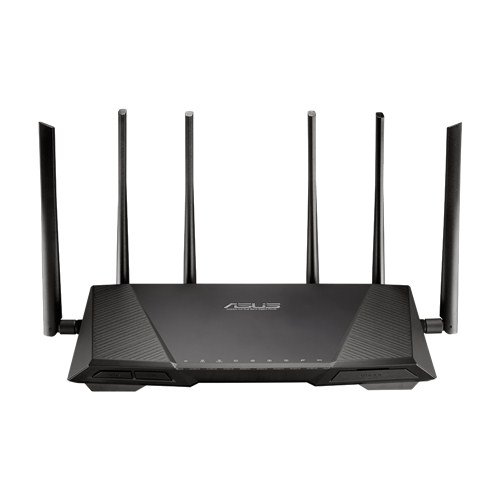 As for styling, the aggressive, angular look may not be to all tastes but it’s actually reasonably subtle in the flesh. It’s also pretty understated in the colour department, missing the garish tones of kit in the “gamer” category.

Build quality is excellent, with robust plastics throughout. There’s ample ventilation, plus four rubber feet to help keep the device in place.

The RT-AC3200 also includes a full selection of status LEDs that sit along the router’s front edge. They allow you to see much of what’s going on with your network at a glance. They’re not quite as easy to read as the shaped LEDs on the Linksys WRT1900ACS and WRT1200AC, but the symbols that sit above the lights are clearer than those on other devices.

Less welcome on the front is the USB 3.0 port. While it’s convenient for occasionally plugging in a USB memory stick to share a few files, it’s an untidy solution if you plan to have a USB hard drive permanently attached. Likewise, if you’re attaching a printer then the rear USB 2.0 port will suffice, but with the port covered by a plastic flap, this too adds to the overall messiness of the design.

Completing the selection of features on the front are a couple of buttons. One turns off the LEDs, while the other turns off Wi-Fi. I’d have much preferred the latter to be a WPS button for easily adding new devices to the Wi-Fi – it seems far more likely to be used than completely turning off your Wi-Fi. There’s a WPS button round the back, but obviously it’s far less convenient.

At this point you’ve probably noticed the six aerials this machine requires – that’s two external aerials for each of the three bands. They’re detachable and adjustable, so can be tweaked for best performance.

Unfortunately, I did find them a touch more prone than most to coming loose and falling to the side. While this is a regular occurrence on just about every router with such screw-on aerials, perhaps because of the sheer number of aerials on the AC3200 it was more noticeable during testing.

Somewhat surprisingly, the AC3200 has one of the most comprehensive setup wizards I’ve encountered on a router. It guides you through setting up your internet connection, providing options for what type of modem it is. It lets you specify from the start whether to use the router as a router, access point (AP) or wireless bridge, as well as more usual assistance such as setting your own Wi-Fi password.

Absolute beginners will find it less intuitive than those routers that simply work once they’re plugged in. However, for those with some technical knowledge, it gets straight to the point, rather than you having to locate a buried menu option simply to direct the router to act as an AP.

Beyond the initial setup the interface is a triumph. It’s neatly laid out and packed with features, plus it’s fast too.

Along with all the usual options for simply sharing files and printers, you can use the USB ports to setup DLNA or iTunes media servers, add Time Machine support, or even use a USB 3G/4G dongle. 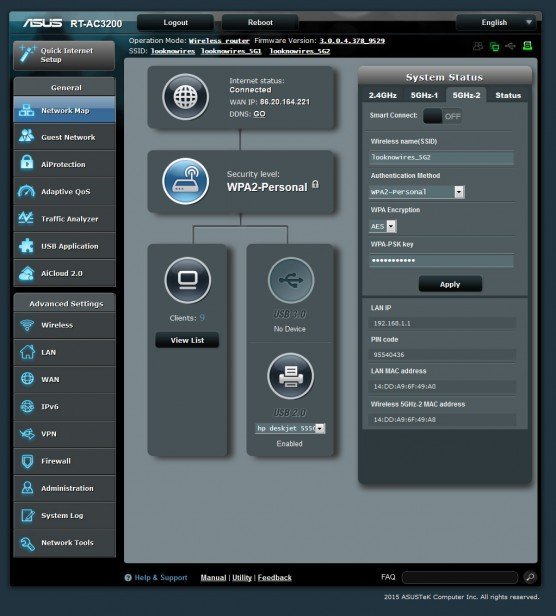 Again, there’s an extra level of complication in that if you simply plug in a USB memory stick then it doesn’t automatically appear on your network; instead, you have to manually go in and turn on Samba sharing. However, if you know what you’re doing then it’s a great way of taking control.

Likewise, there are few issues with printer sharing. The app used to connect the printers only supports connecting one at a time, where all previous apps I’ve used happily support multiple printers. There’s also no way to manually adjust it; the app just does it’s thing and you’re left to hope for the best.

As for AiCloud, it’s probably the least successful aspect of this device. It allows you to access your files remotely, sync your data with Asus WebStorage, and even access shared drives on PCs on your network – plus there are mobile apps for accessing it too. However, the apps are clunky and the whole service isn’t as honed as those of D-Link, Netgear and Linksys. 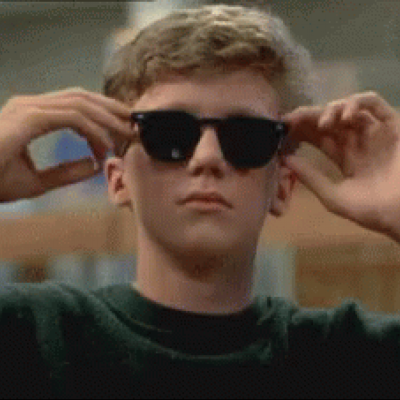 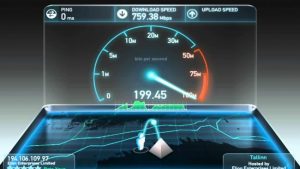